Well, not the day I was hoping for, but I'll start from the beginning and try to cover everything. I got all my stuff together Saturday night. I was up at 5 am Sunday. Usual morning routine, packed up the car and headed out to Knightdale by 545 am. Arrive at 610 am and unload my bike and bag, then head to transition. Bib # 36, numbers were given based on the swim times, so I was up near the front. While racking by bike and getting ready to pump up my tires, Scott J, #34, from Goldsboro arrived. I introduced myself and after learning that this was my first triathlon, he offered to help me out. It was so nice to have an experienced competitor there to make sure I didn't forget anything and to give me advice and words of encouragement. After he held my bike for me so I could pump the tires, he went to get body marked, I did the same shortly thereafter.

It was pretty chilly out, about 55 degrees, and drizzling. Not the most ideal conditions for a race. I returned to the transition area and Scott helped me organize my area and get everything ready to go. When that was all set, he introduced me to a few of his teammates, the Trifecta's, that came up for the race too. Ray, Stephen, and Ron. They were all really nice and encouraging. They invited me to ride/train with them anytime, and after I got home, I friended them all on Facebook so I would be able to keep in touch.

Around 710 am or so we went inside, used the restroom and went to the pool area. The guys all got in and warmed up, but since my shoulder had been bugging me for a couple days, I opted to forgo the warm up. The swim finally got underway around 740 am and I had a really good swim. I passed 2 people over the course of the 250 yards. I exited the pool and headed outside to the transition area. It took me a little long to transition because it was tough getting my tri shorts on while I was wet. Will probably just wear them for the swim next time.

I got everything in order and off I went. Mounted my bike and headed out. I felt pretty good and was moving as a descent pace, until I hit the train tracks and started the only real climb on the course. That's when I felt the road get rough. I looked back at my back tire, and sure enough, it was flat. I thought at first that I pinch flatted, but upon later inspection, there was a tiny piece of glass that punctured my tire. I pulled over to the side and one of the race volunteers came over to help get my tire off and my tube and stuff out. In the meantime, another competitor stopped to help. Things were going okay until I tired to put a little air in the tube. When I tried to detach the inflator from the tire stem it started rapidly filling the tire and I couldn't get it off in time. It popped. Damn. I only had the one spare tube and that was it. No patches for the original tube, so the volunteers called for the SAG truck, which they though carried spare tubes or patches, something that could help. So I waited, and waited, and waited. I watched the truck drive by leading the lead bike, and it would be another hour before it came back for me. I was freezing and defeated by the time they arrived, only to find out that they couldn't help. They didn't have any spare tubes or patches. Just like that, my day was done. They helped me put my rear tire back on and took off the front, then loaded it into the truck. Back to the starting line and transition to get the rest of my stuff. I gave Ron a rundown of what happened and then headed for home. No point in staying for awards when I didn't even finish. I managed not to cry or have a breakdown, a testament to my medicine working.

I got home and Chris was getting up. I told him I didn't finish and didn't want to talk about it. Proceeded to take a hot shower and a nap before getting ready for work, still not having told Chris the story. Quite frankly I was irritated that he wouldn't come watch and support me during my first triathlon, but that was amplified my how horribly wrong the whole day had gone. I think I'm going to have to accept the fact that this is probably going to be a solo journey for me, because he's just not that into it. I'm glad to have made 4 new friends today that are part of the triathlon community. After going through the story a few times with John and my co-workers I still felt angry and disappointed, but I'm also starting to put it behind me. John also helped me find a bike ride next weekend, so I registered to ride the half-metric (33 mile) ride on the 18th. I may try to get a ride or two in before then, just so I have a bit of a base. I also figured that since the tri was such a bust that I would still try to do my 14 mile run tomorrow, after going to IOS and get some new tubes so I can ride. A day of positives and negatives, highs and lows. I just figure that's all part of the tri life and hopefully I just got all or most of the bad luck our of the way all at once. Hey, at least I didn't get hurt or hurt anyone else, so there is a bright side, I suppose.

The race photographers did manage to get one picture of me on the bike before I flatted. 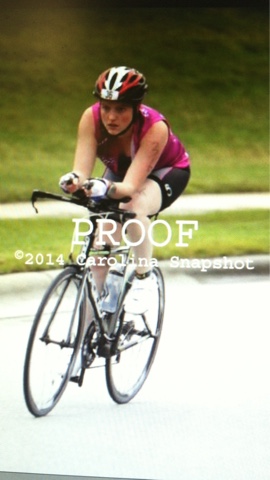 Email ThisBlogThis!Share to TwitterShare to FacebookShare to Pinterest
Labels: October 2014