No rest for the wicked! The Coastal Masters meet was a week after the Frank Clark meet. I signed up for 8 events, all different than the ones I just did and including a 25 of each stroke. I drove down to Wilmington the night before and stayed with Heather. I got in a little late, but was able to go to dinner with her when I got there. We didn't stay up too late since we had to be up kind of early to get to the meet in Bolivia. She helped me get my suit on in the morning, thankfully.

We drove to the meet separately so I could get on the road back to Raleigh after the post meet BBQ. On to the meet. The first event was the 500 Free. The one event I really care about doing well in. I warmed up well then waited for the deck seeding to be done. Now, the issue with some masters meets is that we sometimes need to estimate a time if we haven't swum an event before. Unfortunately for me, my actually time was 6:00.47 seconds and 6:00 is a popular estimated time. You see where I'm going with this. Now, both Heather and one other person put in 6:00 as a seed time. I know Heather is faster than that, so no biggie, but I didn't know the other woman. When we were seeded I was in lane 6, Heather in lane 3 and the other woman who had a 6 minute seed time was in lane 5. I knew I was in trouble when she started in the water. I would have to pace/chase people a couple lanes over, which is a bit more difficult. I couldn't see Heather the entire race, but I knew she went out fast. I was doing my best to keep up with the guy between us that I cold see. Mark counted for me. I told him that as long as I kept my splits below a 36 mid he could just put the numbers in as usual, but if I began to slow to start yelling at me. I was pushing pretty hard and he was quiet, until the last 100. When I heard him start to yell I thought for sure I was in trouble, so I gave the last 100 everything I had. I wanted to get under 6 min so bad. I touched the wall, looked up, and saw a 5:51 on the board. I had to do a double take, then realized I had done it, and by a lot! Heather had finished about 5 seconds ahead of me, so it would have been interesting to see how I could have done if she was next to me. Mark wanted me to push to see how far under 6 I could go, which is why he started yelling that last 100 yards. Thanks Mark! Just based on that race alone the meet was a success for me. Everything else was all for fun. After I cooled down I texted my college coach and Harry to share the good news. I was just a bit excited about the accomplishment. 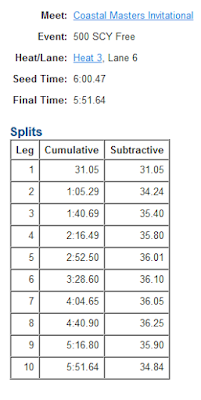 So, not only did I accomplish my goal of getting under 6 minutes in the 500 Free, but I also got all my races I needed to get for the first quarter of the swimathlon league. Check and check!

The rest of March was dedicated to increasing my solo swim yardage/time up to 3 hours (roughly 7 miles) and to preparing for Zones. I kept with the pattern of doing a long solo swim every 7-10 days or so, gradually increasing the time with each swim and working on nutrition. All the pools I swim at have a big clock that I can see while I'm swimming, so for my swims I did 30 minute intervals, stopping for 30 seconds to a minute in between each for nutrition. I did a 2.5 hr swim the week after the meet and the next two were both 3 hours. Here's some data from my first 3 hour swim. Pretty solid in my opinion. 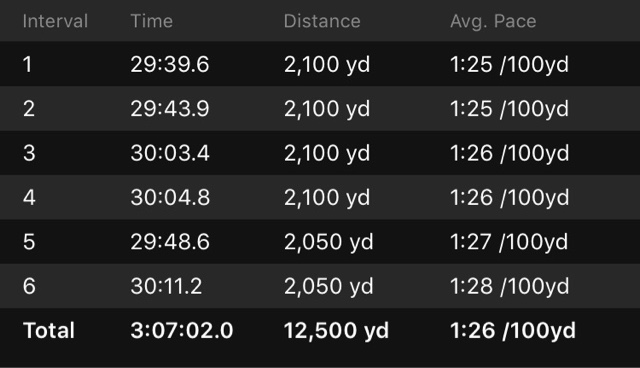 I ended up deciding on the Hammer Perpetuem (chocolate flavor) as my nutrition for the swim. I don't mind the taste, it's easy to drink, and it's got everything I need. Taking a swig of that followed by a swig of water seems to work best. Glad I got that figured out! After the second 3 hour swim I started to "taper" just a bit for zones. By the time the end of the month came around, I was well ahead of pace for my million yard goal.

Approximately 45 miles ahead of where I need to be at the end of March. Steady as she goes! 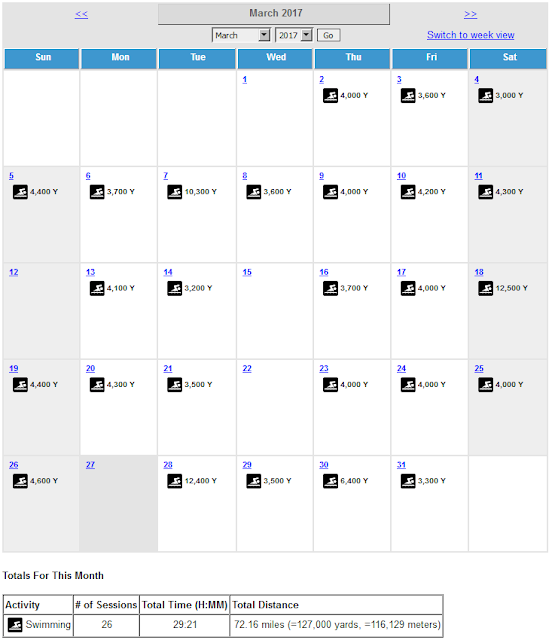